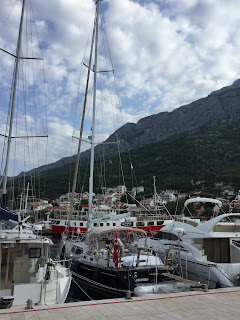 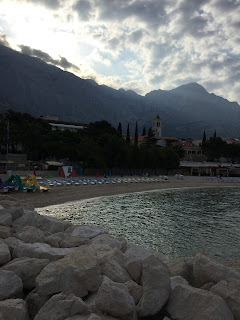 Today seems to be another nice and hot day. We managed to do without air conditioning, but we kept both windows and doors open. We had our morning-bath before  seven o' clock, and now we've had breakfast. Terje is at the barber, and I have a quiet moment writing the blog. We're still waiting for the young couple to wake up, so I think I'll go and book pedicure by mid day. It's too hot to be outside anyway.
Later...
After breakfast, the men went shopping in Makarska, while the ladies went to the hairdressers for a nice haircut and pedicure. Later on we decided to visit Mostar. After all we thought we'd heard that it was just an hour of driving one way. We figured out that it could be possible to drive back and forth between Baska Voda and Mostar within 3 hours. We managed to get a couple of photos from the old town before we had to hurry back for delivery of the hired car, and we were half an hour late.

Now we are cruising towards Monte Negro. We have to check out from Croatia once a year, and that's what we're going to do now.